What is blue green algae?

Blue green algae is a photosynthetic bacteria which grows in both fresh and marine water. Most typically, blue green algae grows in lakes, ponds and slow-moving streams where the water is warm and nutrient-rich. Most species are buoyant so float to the water’s surface, and form layers of scum known as algal blooms. It is able to multiply because it’s generally not eaten by any other species. Algal blooms can be very noticeable because of the smelly scum that can form on the surface of the water, however there are not always visible signs of it in water bodies. This is where a blue green algae test comes in. 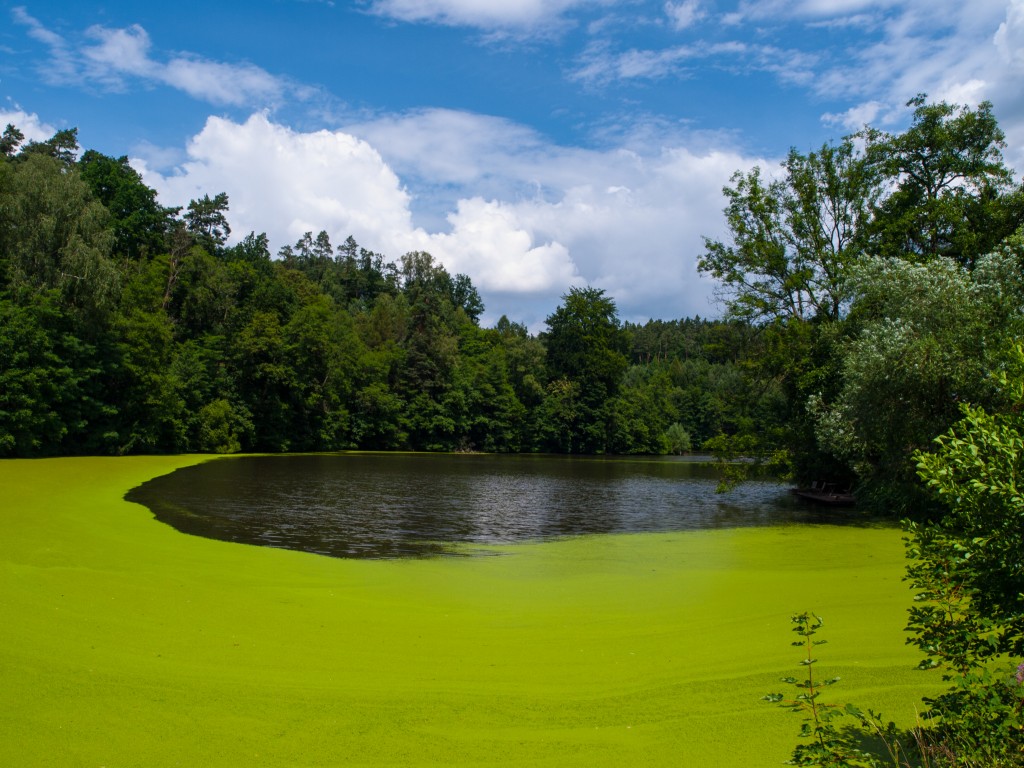 It’s important to monitor levels of blue green algae in water because blooms can have a devastating effect on a body of water. It causes discoloured water, reduced light penetration, dissolved oxygen penetrations during die-off, and toxin production. A reduction in light penetration affects other aquatic organisms in the habitat, such as phytoplankton and aquatic plants that need light for photosynthesis.

This has a knock-on effect on the organisms that rely on the plants for food. When blue green algae dies off, the cells sink into the water to be broken down by microbes, a process that requires oxygen. This results in a biological oxygen demand, which decreases the concentration of oxygen in the water, adversely affecting fish and other aquatic life. This has serious ramifications for the ecosystem as a whole.

Aquaread’s blue green algae testing meter is an optical sensor that is a submersible, fixed response fluorometer. Using freshwater settings for phycocyanin, an orange light is emitted by the device. The algae absorbs the energy from the light and emits, or fluoresces, red light. For marine blue green algae (phycoerythrin), a green light is transmitted and the algae fluoresces orange light. The blue green algae sensor measures the amount of light emitted by the algae, which indicates the concentration of algae in the water sample. Our optical sensor can measure phycocyanin in the range of 0 – 300,000 cells/mL and phycoerythrin in the range of 0 – 200,000 cells/mL.

Using a fluorometer to measure levels of blue green algae in water is not as accurate as measurements that can be made in a laboratory, using cell counting or molecular analysis. The accuracy can be affected by; interference from other species and compounds that fluoresce at similar wavelengths, differences in the fluorescent response between different species of blue green algae, differences in the fluorescent response caused by temperature and ambient light, and interference caused by turbidity.

It is possible to obtain more accurate results by post-calibrating the data obtained using the fluorometer in the field with data from standard lab analysis of grab samples acquired during the study. The blue green algae testing electrode must be calibrated carefully to maximise accuracy and ensure consistent, reliable results.

Conducting a blue green algae test using fluorometers is possible because the pigments within the bacteria are fluorescent. This means that when light of a certain wavelength is emitted, the algae absorbs the light energy and emits a light of their own. A fluorometer is a form of blue green algae sensor that enables concentrations of it to be tested in the field, which means that it’s not necessary to collect samples for analysis in a laboratory. Laboratory analysis can be a lengthy process and delay control actions. Using a fluorometer to detect it provides instant results.

Some species of blue green algae produce toxins that are poisonous to livestock, wildlife and humans, which makes it necessary to monitor levels of blue green algae in water, especially as the algae is not always visible. Applications for blue green algae testing include water treatment plants monitoring its levels in drinking water, and fishery managers ensuring that it is not present in their lakes – as this could starve the fish of oxygen when the algae dies off.

Algal blooms can negatively affect humans when affected freshwater is used for recreation purposes, such as swimming and boating. Not only does the water look and smell unappealing but the toxins can cause symptoms such as stomach cramps, fever and difficulty breathing. Water affected by blue green algae is also unsuitable for agricultural use. If blooms form in reservoirs it can cause serious difficulties for drinking water supplies, and can make the water undrinkable.

Aquaread produce highly durable, multi parameter water quality testing instruments that have been designed for use in the field. The blue green algae sensor is an optional optical electrode that is suitable for use with any of the Aquaprobe products. The multi parameter probes include standard parameters and additional sockets, to allow users to mix and match and create the instrument that best meets their needs. Alternatively, if you don’t need a multi parameter device we have designed the AP-LITE that has just one socket for an optical electrode.

If you would like any more information about TDS meters and other total dissolved solids testing equipment, or water quality monitoring in general, please contact us. Click here to see our product range.