As the population increases, so too do industrial demands, leading to strained agriculture, food, paper, and commercial industries.

Technology and the means of manufacturing have advanced rapidly, and, while significantly important, these processes are often very damaging. Now, full-scale industrial factories pollute their surrounding environments and ultimately, the world – so much so that industrial waste is one of the biggest sources of water pollution.

What is industrial pollution?

To understand its impacts, we must first understand the sources of industrial pollution. The short answer is that it constitutes any pollution of which the source is industry of any form.

As for the longer answer, well, let’s look at some common industrial pollutant-causing activities:

Industrial waste can be both hazardous and non-hazardous, with the latter including things like rubbish and debris. It goes without saying that ‘non-hazardous’ doesn’t necessarily equal ‘fine for the environment’.

Waste classed as hazardous include things like ammonia, solvents, and petroleum, and are classified as such because they have one or more of the following characteristics:

The effects of industrial waste 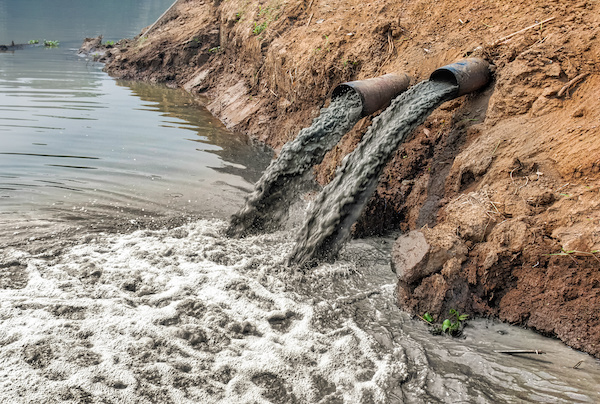 When metals, chemicals, and sewage are released or leak into the environment, they cause significant air, soil, and water pollution – the latter being one of the most devastating results.

Often, untreated wastewater is wrongly released back into bodies of water due to lack of infrastructure or regulation. When this happens, lakes, rivers, and coastal waters can become significantly polluted.

Pollutants like total organic carbon (TOC) and compounds containing nitrogen and phosphorous can lead directly to eutrophication, which can often be the death of a body of water.

Eutrophication occurs when a body of water becomes enriched with nutrients and minerals. While that might sound like a good thing, it is precisely the opposite. In fact, eutrophication promotes the growth of an overabundance of toxic algae and plants, that in turn increase levels of carbon dioxide in water.

By nature of growing rapidly on the surface of the water, toxic algal blooms can decrease sunlight and lead to hypoxia (a lack of oxygen). Oxygen starved waters are, as you can imagine, not ideal for aquatic life. Fish die and biodiversity dramatically decreases.

As the excess plant matter decomposes, carbon dioxide releases and eventually makes its way into the ocean. This leads to ocean acidification, which is harmful to marine life – including the shellfish that we eat. 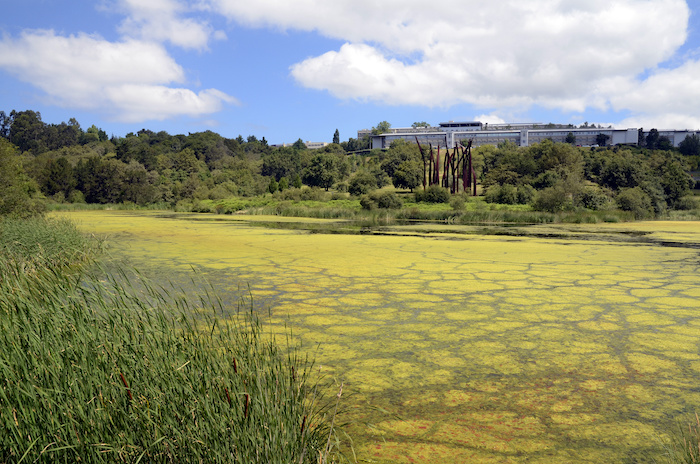 So it’s easy to see how fine of a balance is needed to sustain aquatic life. Without human intervention, eutrophication is a natural (but slow) process that occurs over centuries. The problem lies in industrial waste speeding this up, with consequences for drinking water, fisheries, and recreational water alike.

Water pollution is a cycle

Water pollution doesn’t solely impact aquatic life. To put it simply, water is so important because it sustains all living things.

We have come to rely heavily on water for industry and agriculture – but what about when the water we use is itself contaminated? The farmer uses the water for irrigation purposes, and the quality of our crops is affected. More fertilisers are used, and fertilisers pollute the water, and so on.

The thing is that water is not a limitless, ever-renewing resource; in fact, we’re running out of it. Water pollution perpetuates itself without intervention and innovation. So what can we do?

The solution to industrial pollution

There are a few things that need to change to minimise industrial pollution, namely:

Without a holistic approach to industrial pollutant management, efforts are made redundant. In order to turn this around, changes need to be immediate and global.

The EU, for example, has put in place a ‘Zero Pollution Action Plan’ that aims to reduce water pollution – and the UK should be sure to follow suit. After all, if there’s no policy, there’s no incentive for businesses in industry to do things differently.

If we’re to have a future where industrial waste is healthily managed and doesn’t pollute the environment, a key part of the process is water monitoring.

Responsible companies and industries will partake in regular assessments of environmental impact – and what easier way to do so than with Aquaread’s water monitoring equipment?

Take a look at our range of water quality monitoring kits that function across a variety of parameters, all of which are important to monitor in order to sustain clean waters.

Let’s work towards a green (although preferably not algae-filled) future together.